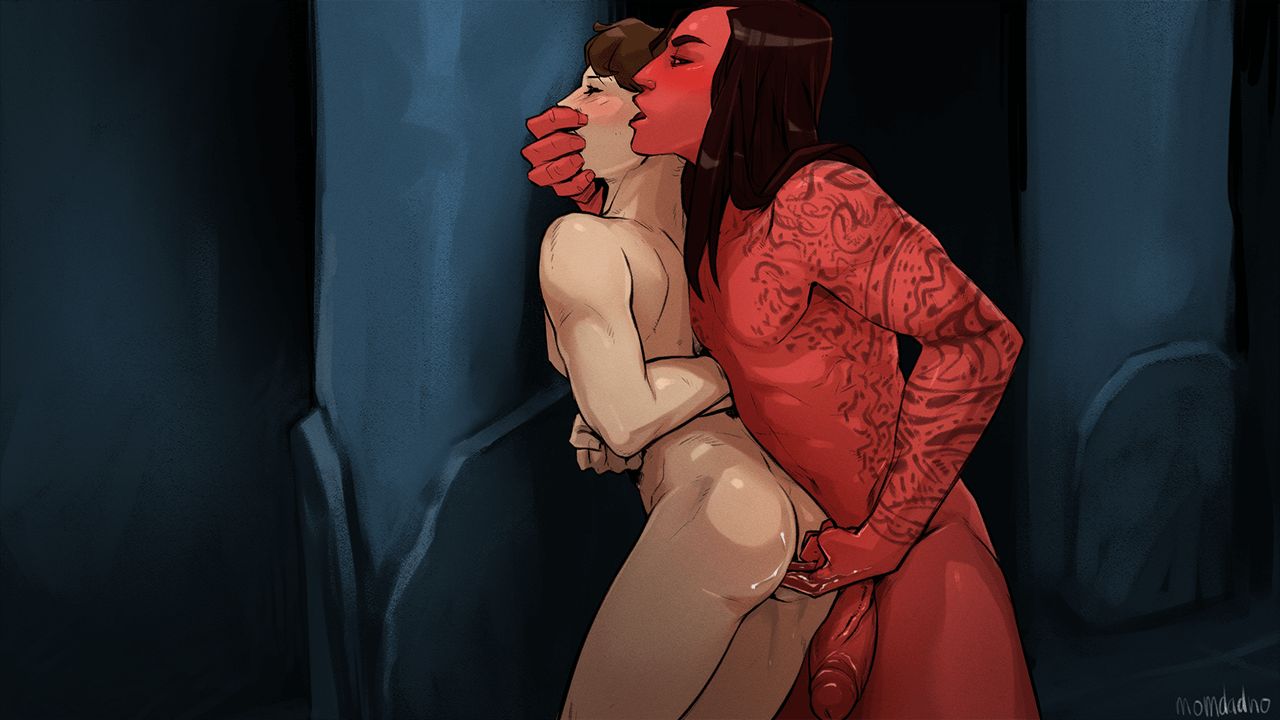 Hello my fellow Ameri- Ahem, I mean gamers. Dude, that was a close one. Kinda zoned out there for a moment, but stuck the landing. *Judges hold up score cards* Six point five out of ten? o. O Damn it… at any rate, this is going to be a bit of a bumpy ride. Strap in boys; and girls or assorted weird-arsed but oddly sexy fantasy creatures aside…

Let me preface this a bit. First, I have no actual problem with gay content. I’m not myself, so it does nothing for me, and on the point of most of an already niche audience, I don’t think you’re doing yourselves any favors funding wise. However, inclusion isn’t bad. That said, there’s a lot more to dig into. So let’s do that.

There is a brilliant amount of world building. A protagonist with skills to build on, and a story that is well crafted with a fairly cohesive main plot. There is actually a cadre of protagonists, and they are somewhat distinct in and of themselves. This is a game that will try to challenge your moral compass. The problem: It doesn’t completely hit the mark. For now I’ll focus on the good points. What I liked, and what has potential. There is a diverse cast to pursue. There is a set goal, and a path to the end in sight. Sort of. There is a system that might actually play like there are a few different types of classes. The character is not an instant win mage. There is a building to relationships that make investment in each major character seem worthwhile to pursue.

The plot has a decent amount of believable politics ingrained. That might not be a plus for everyone, but keeping it straight is never easy to do. I give props to the Dev team for keeping it even halfway plausible. I do have experience in that kind of writing. Whether I originally set out to or not. Good on you. The art work is very well done, for the most part. There’s not a lot of it for some erotic scenes yet, but it’s good when it’s there. That’s to be expected when the game is as slow to produce as it’s been. It’s not nearly half done yet, I don’t think.

A BIG chunk of the story relies on events that already happened. Your MC is a hero from another tale, sledgehammered into position of having to “choose” to be a villain; more accurately how far and hard they’re willing to fall. What it will cost along the way to that end game, is incredibly up for debate. The choices are not always clear on the outcome. The events are all randomized, though they are to be fair, hammering that out in new updates. A bit. I’ll give points to the work done, but it NEEDS a walkthrough. Not a piecemeal attempt on some almost never seen forum site.

You are beat down and forced by a pair of demon overlords, into a very untenable situation, as the ‘rogue type.’ You can argue since he was more the morally light but still grey character as a hero, he was more inclined to shady acts in first place. This gives them wiggle room. However, not making him an outright demigod, or a paladin type does hurt your ability to effectively think you can EVER fight back. The entire exercise in fact feels like every step forward will lead three jumped back. I’ll give some prime examples…

Seriously, how “conflicted” does she look to you guys?

Was This REALLY Necessary? o. O

Fem Dom Spoiled Princess is her ONLY mode

There is a HELL of a lot of wasted potential in story line here. Mostly because the Devs want to fuck around with random side character kinked out scene BS. Which is fine. Really, it’s their call. They want to create a world of warcraft style game, a VN and an RPG rolled into one. That should tell you their mindset. It DOES NOT work. This story would beg in dying agony to be just a straight up VN. Give it a freaking Renpy Remake and I guarantee it’d sing like Sarah McLaughlin. It could really be a beautiful, dark and erotic tale down several potential branches. If you’d just stick to the major character developments, and the political empowerment.

Let the player find ways to actually make the best of the clusterfuck you’ve thrown him into. I love some of the characters, but – let me actually marry the fucking goblins, and only the girls thank you. It’s fine to ask if I want to play gay, but if I choose Cla Min the option to go with anyone other than her, and her daughters should go the fuck away. Period. Choosing it even once means I DO NOT want to see that kind of content in my playthrough.

Sorry about that. Anway, you can pursue about four characters currently to any viable means. Jezera is openly too much the harlot to be worthwhile, and unless you’re into demigods you have no fucking hope against who ruthlessly screwed your life, the answer is no. Just no. If you are… you might want to see a psychiatrist. ASAP. The Knight, is best girl, since Alexia too often is made to mirror Jez. It shouldn’t be that way, for SO many reasons, but given the amount of sex situations she doesn’t need to be in, that she can endure… it is. Which leaves Cla Min. Potentially her daughter. Both of whom are straight up team Rowan. Down to fuck, and openly eager to breed. They’re goblins, so that’s okay I guess.

Not even going to note how that brushes up against my own tastes. Like Sandpaper; because as yet the best you can do is a repeated blow job from the daughter, and a tit job from the only goblin you’re actively “Married” to. Even though they are poly. Marriage isn’t really what it is, so much as a bargained blood sharing arrangement. She will never even actually refer to you as her mate. Never mind husband.

Last Go Round For The Bend On Bad Turns:

Small nitpicks now – you can’t see the items in Rowan’s inventory so you do not know what you’re equipping. You have a limited move count per exploration sequence. It wastes a week, when it should be a day or two at best, for every sequence undertaken. You have a fucking TIME LIMIT. Cardinal SIN. Rowan can and will almost always fail checks made. Which forces a LOT of saves before any decision made. You almost never level up, so you can’t increase any of your chances to do jack shit for ninety percent of the damned game. Since the game is RNG heavy, all of the sex scenes are random, and most of the trigger events are not listed in a journal even as hints. There are exactly two quests. One has so many varied outcomes you may well fuck up what you intended for it’s end.

Keep in mind, this game is not even remotely done development. I do understand that, but it’s also an incredibly slow process owing to the company in question being tied to several unfinished games as yet. With very limited funding. This is a NICHE market. If you fuck over most of the core audience, which is by and large straight white males, you will lose funding you already don’t have enough of. In short, you are almost guaranteeing you will never finish it. Which is a terrible shame. This story does have a MASSIVE potential. That prefaced and vented, here’s how I’d improve things to start.

First; Don’t make Rowan married. Make Alexia some bumbling young hedge mage. Who randomly wanders into the castle. Do what I suggested with Jez for a plan on Rowan’s path. Split them. NTR counts in any vested level of commited relationship. Not just marriage folks. Alexia deserves much better than she gets, and so does Rowan. Now onward Thudercats, hoe and rake besides…

You Get 2 Choices: See This Happen To At Worst Your Acquaintance…

Or Claim Her As Your Btich… BUT Wifey Poo As Shown Above, Will STILL Be Pissed Off?!?

In the end, for me this game is a VERY mixed bag. It’s got a lot of wonder to it. It IS to a very fine point and with an exceptionally thick skin, worth your investment as a player. But boy damn, does it have a long way to get polished before I’d dare to call it the gem I think it should be. One day. Somewhere over a rainbow. Whether or not said natural phenomena ends up coming across Fifty plus Shades of Grey. Bet you didn’t think I’d finish off with an allusion to the game’s most monstrous shaft. That’s just how I play. See you soon, my menagerie of weird and wicked gamers. I’m off to sharpen my own set of fangs.