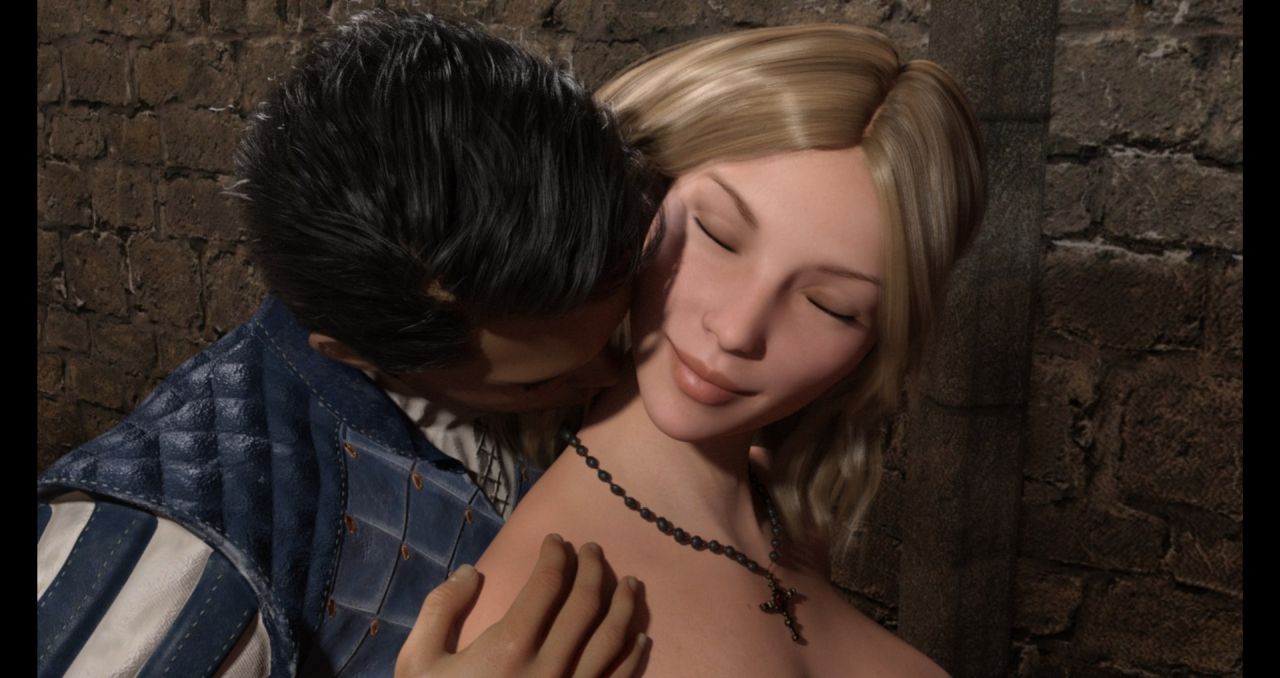 Hello again my gaming friends. Romans, countrymen and otherwise. I won’t ask you to lend me your ears. I’ve got enough corn for the popping, I promise. Lame duck jokes aside, let’s get into the meat of this presentation. We can throw the potatoes aside. This isn’t Ireland, though it’s green enough in some places to compare… Onward we go!

This one is another Ren’py style VN. At first the pace is very slow and there are a lot of choices I thought would affect an end. The idea of a king the MC might not get along with; or a squire who’s a girl, fathered by his mentor could have been interesting points pursued for a bit of depth. Alas, the intrigue there seems to have died. In favor of some very… overt relationships. Now I am not a judgmental guy by most standards – considering I’m a Scorpio, BUT… there are a few problems with the main one. You have a wife.

As. A. Lord. That wife is at least Bi-Sexually inclined. Very probably using your ass for an acceptable beard if honesty were written clear. She also does far too much to try to be MC’s equal. In the time you have set the story, that would never fly. First and if she IS actually gay, or even the half-way inclined she seems, she couldn’t afford to draw that kind of attention. She only rules the townfolk by her lord’s permission, and on that point he is. Far too much. Permissive is just passive weakness implied. A Lord cannot afford to look weak, else he would be replaced.

I actually thought they’d go dark and NTR all over the place. Have his wife fucked by another lord, or his mentor while he was away trying to get into Mentor’s daughter’s pants. Or the guard at the king’s gate. Or the king himself. Either way. (I think I’ve played too many of those types of games)

They surprised me by not doing that, and even making Catherine “okay” with being Cuck-Queened. The problem with that is just how much they play up her ardor for Lidia. The cute little innocent peasant girl you two have apparently raised like she was adopted. Because it was assumed Cathy can’t have kids. Except if you come inside her often enough; she can. She is the first to get pregnant, so I will say – Yay! no… really. Good on you for that – BUT; you really shouldn’t make her so invested in this little girl if she genuinely loves her husband. Being willing to tease, test and play… even to the point of actively being his wingman is fine.

You can choose to breed your Lady of the Lake ; )

I’d laud that even, because most games will punish a player for, well… being one. This one doesn’t. Here is the thing about Dominance, and males specifically. If yours is, he’s not going to want you spending your time on anyone else. If you let him have a harem, you shouldn’t be horning in on his girl. Especially if Lidia is as curious and innocently indecisive as you’ve written her. I legitimately believe the writer would rather just have Lidia and Cathy run off together. Since the title screen is three girls on their knees ardently staring at the screen that point is far too jarring.

Story Is All They’ve Got Guys…

Then there is the recently added content. You do know you’ve decided on a period piece, right? Like a time wherein a female would be literally beaten bloody, if not tied to a pike and lit up for even half what you’ve written of any of them so far. Less than, in fact. You can hate it all you want, but damn… Either follow course planned, or find another story to write.

A touch of progressive mind for a lady is fine. She can get away with certain liberties. I took incredible umbrage at the strap on, by the way. First, if she was a Lady I guarantee a dildo would be the last thing on her mind. At the least for propriety’s sake. Second, as a Lady, she knows if she gets caught and goes down, it’ll be her lord’s head first on the block. For knowingly conspiring with a “slut/succubus” and Satanist. If the new king was that much of a stubborn dick, do you really think it’s best to write this kind of shit? Actually that could with some work become the advent of the NTR content… a royal devil’s bargain begun not just to save her own hide, but her husband’s. Maybe he wants to get rid of an inconveniently ambitious young queen? Just saying… It can be done.

Still Story… (I Warned You)

Secondly; IF Lidia is meant to be pursue-able by MC at all, the biggest draw she has is INNOCENCE. Virginity. HE should be the only one that’s ever in question for taking it – since you didn’t decide to do NTR that I can tell.

Do They Look Like Mother/Daughter Relationship To You? o. O

It would be a different yarn entirely if there was an end planned where Cathy and her run off together, or the peasant girl protected by the lord and lady of X keep can get taken in the street like a tavern harlot one day. Least expected. Those darker elements are not present, and they don’t ever have to be. They really shouldn’t be. BUT, don’t make the Lady a direct challenge to her Lord’s authority. If she’s cheer-leading him with either girl, she shouldn’t be willing to penetrate beyond fingers – and that’s bad enough because even that risks the virginity gone.

Really Getting Tired Of The 300 Word Warning…

Here’s the thing, you want to play that way fine. Fair enough, but it is an affront to a Dom. It’s also better done AFTER MC has had the chance to divest her of that purity. Also why in the hell the second time MC and Alice have sex at her behest, do you take the choice to cum inside of her away from the player? If I want to get all three girls pregnant, that should be the Player’s Prerogative. It is another way to make people doubt a harem end, and she isn’t old enough that him finishing inside should set off warning bells. Besides; she is his squire and calls him Master. She’s essentially set for life, since she’s his woman on the side.

I am honestly getting tired of being teased, and having control of end scenes taken out of my hands. Either the girls are DTF, and willing to take the consequence if a Harem is what they’re all okay with, or they aren’t and it’s a dating sim. PICK ONE.

Seriously Robin, I REALLY Wanna See What’s New Under Your Hood, If You Know What I Mean… I’d Lock You Right Up To Keep.

** Do something with either a Mentor check in, or the king. Hell, set up a story into play where MC can seize the throne, if King decides to “blackmail” Catherine to initiate NTR he thinks she can’t refuse; only since Cathy is MC’s unquestionably she shares with MC the play. Forewarned means the wrong guy loses his head… Else follow through and have Cathy taken away to be the king’s new Mistress at court. Either way, it’s a win. She’s already pregnant by MC at this point in my story, and it leaves you with Alice/Lidia to keep. Cathy is fine as the king’s new breeding bitch, should you go there.

** Perhaps add Felicia as a potential romance candidate. Outside of Cathy’s awareness; if you are intent that Cathy should run off with Lidia. MC can still keep Alice, and even make her his Lady true at the end. Since she’s “Just as kinked as Cathy” by his own admission. She will be better written to be more inclined to cock though. Because she knows the stakes as a peasant born, where Catherine was allowed as a noble to be spoiled.

** IF you’re going to go a “darker” route, you could do NTR and make it fully avoidable, BUT if the king is going to fuck Catherine for his mistress into another baby bump… let the Lord in Title play with his Queen. You could even go a dichotomous route and have her look like a Latin version of Cathy. Dark hair, brown eyes, same features. Make her strictly dickly; unwilling to do anything but breed for a legacy, but willing to let the Lord have his way with his “toys” as her new king, so long as he keeps her for a queen. Chaos isn’t the only ladder; and if he’s a player with a mountainous obstacle, sometimes the best way is to just go and climb her.

** You could make a backstory section the player can choose to view or not, where the King came to visit while the Lord was first gaining Alice’s trust together. The baby in her belly now doesn’t have to be her husband’s get. Have Lord break his word at the end, and keep both Cathy and the Queen, if you want to get real twisty. Or play Pokemon… I know some people like that. Point being, you can do the game several other ways, and still have Lord not come out weakened. The king doesn’t have to stay in power by birthright. Coups happen. Just ask the pigeons…

Despite my whining – what’d’you want, I am a Wolfe after all – it is a very good story. There is potential there. Even a good bit of actual intrigue, with cards played right. Screw chess. That girl is eerily good at it. I’m not going there. In the Game of Kings, you win… or Lidia’s on the other side. ; )  I know you think you know where I was going there, but unless MC can become the Night King who rides, Catherine’s still the coldest fish on the side. Merry Christmas to all, and I don’t give a flying… reindeer if I’m a few months early tonight.