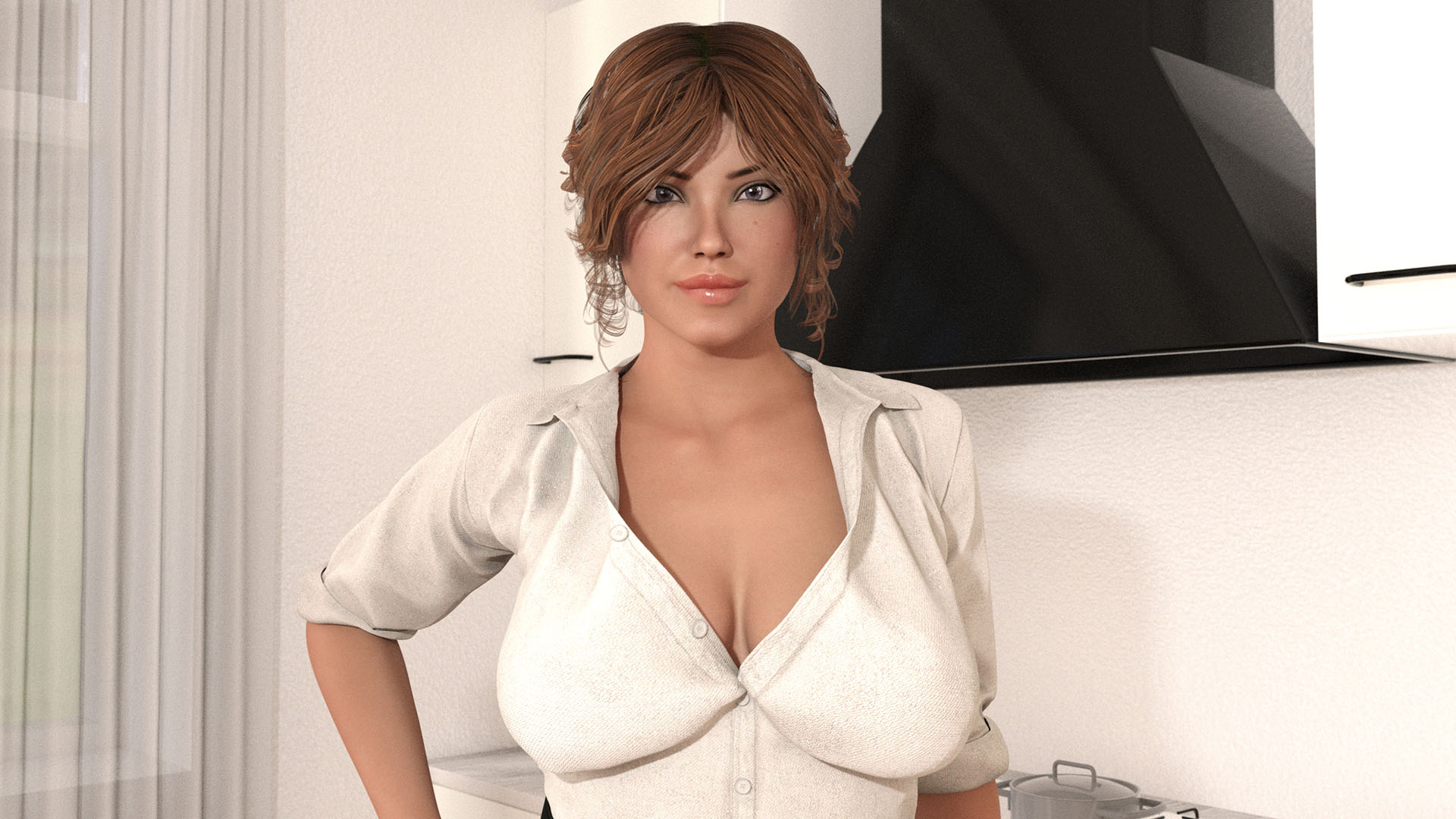 All joking aside though boys and girls, if incest is something you’ve got no problems with, this game is brilliant. For those who couldn’t guess by the fact I’m writing this, I’ve returned as your friendly neighborhood wild man, Wolfe Hearte. You ain’t gettin’ rid of me that easily I promise. General Warning though – if it’s not your thing, well I’d have to wonder why you’d click on a game with the title “sisterly lust.” Or I would, if it wasn’t shortened to SL to avoid pissing off paetron most likely. On to the fun bits of which there are many…

There really aren’t too many. Like most visual novels it’s a fairly linear progression. There are a set amount of females you will have to patch in to match the original title of the story and not make it very, very weird and confusing later on. I admit since I patched it, I don’t know how the general story-line handles things if it’s not your blood family you’re living with. You might be able to ignore the “lost” part. It has a stat sheet for the four main women in your life. It tracks Love and Corruption for all of them, and whether you are currently in a relationship with any of them (or all of them, but I’ll get there shortly) Other than that, there are choices that they will respond positively to, ones they won’t and a few avoidable ways to screw the pooch. (Not really, but given how the antagonists feel about the main family by the current released end, I wouldn’t be surprised if they went there too) None of this game is actively punishing and the current walkthrough handles the majority of current content. Which means downloading it is highly recommended, if you’re not the sort that wants to spend hours spamming the ‘back’ option to figure out changes to Love and Corruption stats. There are also a bevy of side character females who will still (currently) not punish the player for pursuing. Unless you try and be conniving. They don’t like that. There is actively a way to pursue a harem, for those who want that. There is a pregnancy mechanic active as well. For myself; both major points in respect to that for the boldness and also some concern. Being fair, the name on the tin is Perverteer, so maybe it’d just be me to worry about real life connotations here. I’m still not fond of that word being over or misused.

Overall, very, very well thought out. It’s paced in days. It’s constructed so it makes sense and there are very few errors. I do think one of the girls in particular is designed to be the type that wants to get caught. The girl who’s the biggest draw ends up being a ‘slow burn’ to sex. That kills desire as often as it piques against anticipation. However, here they manage the feat. She is worth the wait, and ends up trusting you most. There are elements of domination with one girl, though I will state the main character should not very technically call the girl a whore. Whores are paid. She is a submissive and a slut, properly. I’ve never liked the tone of the word whore. Don’t like writing it much either. It’s a thing with me. Anywhoo, there is also a path of female domination. The mother figure has this vein, but you can skip it if you want. She’s still available to pursue, but again to find out the sequence which is a several day specific event to earn, you’ll need the walkthrough. The harem path is potentially the most fun, and probably for me the only real reason to play. I guess I have a vein of the MC, because in the case where I don’t have to pick just one without terrible consequence, I won’t. Word of warning, Bella has a sub path, and a love path. She will only be willing to converse (currently) about pregnancy if you are on the love path. The mother has a love path, or a discreet path. The latter being the femdom optional. I will suggest however, because I didn’t factor it into one of my two full play-throughs, that you do go with Nia in the island section. It might end up helping the story much later. I don’t know. Remember, this isn’t a game out to punish you; and I for one would bow down to the new gaming overlord for being nice enough to think not everything about a dating sim needs to be dark souls. But maybe that’s just me. The only actual problem I can think of is the direction taken in the story. It’s a bit conflicted, and the reason is it’s not a game out to punish you – but, every antagonistic character is. So the story has to get at points extremely judgmental, and that could be a problem unless the devs figure out a concrete way for the MC and ‘friends’ to fight back. Moving to a new country is a good suggestion, but it’s effectively running away from a problem. It doesn’t change that it IS a problem. On the harem route you can end up with all of your female family pregnant by you, and yes btw, that is the source of the jest above. Boy must’ve been a satyr in his last life or something. Hmm, which would be worse; great balls of fire, or blue ones… Guess you’re screwed one way or the other, huh?

Thus far I can’t find anything all that bad to say about this game. I’d prefer to not have to know the Konami code to avoid feminine dominance, and some of the digs at the player are not justified. Bella’s a Tsundere/Sub so I can live with it. One point though; when he claims he better not mess with her, and she says damn straight or something to that effect – the only reason she was out of her “negative” situation was because the MC helped. He’s the driving force of her empowered state. She wasn’t. There’s also a point where the Mom freaks out to learn her daughters are fucking her son on the harem path, but on that same vein it happens right after you talk to her about the idea of impregnating her. You’re her son, and she doesn’t mind that. I will grant she handles it in dialogue by copping to the BS, but it’s still BS and jarring logically. If I had to rate the game, I’d give it an 8.5 overall. Very well handled, lovingly implemented and they do work on the bugs in each release. The devs obviously put a great deal of care into this, and it shows. It’s one of the more time worthy investments on site, but you will need a good chunk free if you’re going to play it. Come on guys, you missed me, you can admit it… Happy trails for now, fellow gamers. You won’t have to wait for the next blue moon to hear me howl again.

Deviant Discoveries – Less Deviation Would Make A World of Difference

Become A Rock Star – No Way To Get Your Nickel Back…