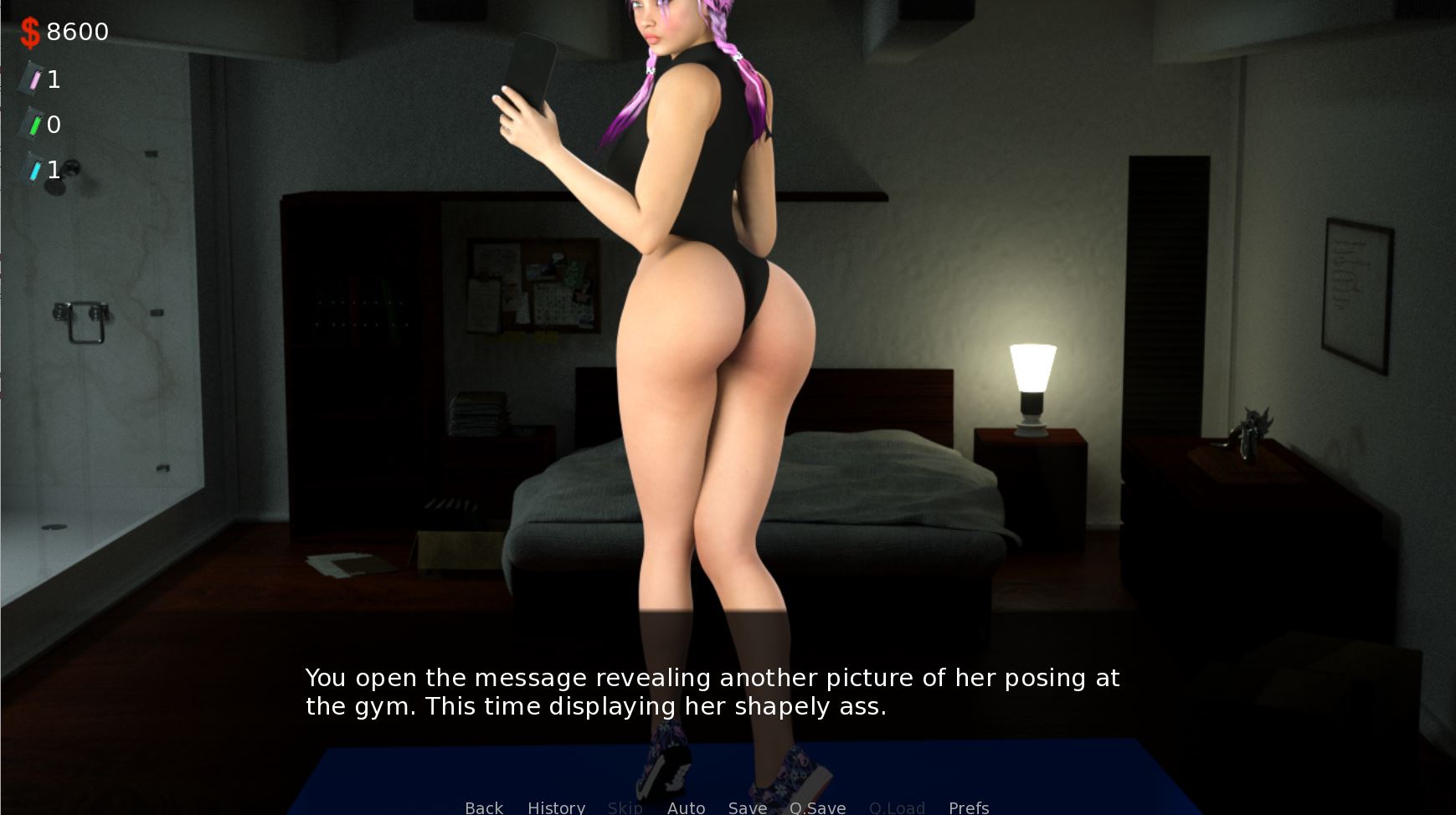 Deviant Discoveries – Less Deviation Would Make A World of Difference

Hello again Gamers, it’s your favorite Lunatic Wild for these kinds of games, Wolfe Hearte here.
This go round, we’ve got a game for all those fetishists out there… well maybe not ALL of them.
At least not yet…

The story is simplistic. It has also changed a lot from when it began. The story used to involve your father running a company and testing you as a worthy son as far as I recall.
Anyway, the present version you are a scientist who came up with a very interesting set of formulas. A blue one, a pink one and a green one. For some reason these all cost different amounts of money to make, and they all cost a time slot but we’ll get to that later. I promise.

You start as a guy who injected himself experimentally. You didn’t die. Yay you. You did however morph into an arguably ‘enhanced’ version of you. This will come into play much later. For now what matters is you know your experiment works. You move to a new place, with no real source of funds and a desire to continue research. To expand the scope as it were. This is where the fun, and the pain of it all starts…

As mentioned, your primary focus is the lab and gaining money to make the potions to help you win over the girls. Now, very technically everything you do in this game is only arguably consented. Coercion is to many an acceptable, but slightly sleazy grey area that you have to tread with care, but considering this isn’t outright mind control so much as chemical manipulation that probably works a good deal like the real concept of hypnosis in that you can’t make someone do something they aren’t already some way inclined to, it’s acceptable.

At least as far as I am concerned. I will admit that the dev could have just given you more influence in certain areas. The “Dom/Sir – I serve you” stuff conflicts as there are points the MC gets screwed out of control in events. Again, I will get there.

Mechanically speaking, the green potion costs three money slots to make. It is the most overt and the most expensive of the potions and you can use it on several of the current girls. There are also two or three women that are only partly implemented. With one showing up for the supply of an ending. That’s it.

Now, there is at least one ending I could have gotten. I chose not to. I was not certain I had done as much as I could in game. There were several choices on how to share what we had done to the dean of the college. Who at that point was very much “entirely” my MC’s bitch. you can tell her you gave her the blue one, which is the safe option. You can tell her you gave the pink potion. I didn’t do that. I figured it’d be the pissed off option.

You have the option to tell her about both in sight, but it says not implemented yet. You can also choose to tell the sixth ranger the truth or just inject her with blue serum to get the schematics you want. I injected her, so I don’t know what telling her the truth does. I am not sure at this point in the game’s dev it really does that much.

The grind to get the money is painful. Grinding to get the girls to do even the barest sexual things is worse. It actively involves for all the more advanced stuff, even before you use the green potions on one of the three main girls you’re supposed to (Chrystal, Harley or Yuki are the students you can gain control of) buying a lot of sex-shop gear.

Now here is one of my major problems with first introducing a bi open girl in a harem game (and more specifically not being clear that’s what this was, because it seems like it should be MC focused harem from the start) You go through a LOT to get the girl to open up to you. In the previous versions I played you used to just be inject her ass with the pink serum and she would actually full on fuck you and want to keep doing so. Now even when you do get through the barriers of loosening her nerves; she says she’s saving herself for marriage.

WHILE also admitting she’s already “done it” and decided about that after the fact. That is just stupid. It happens, but it’s just a road block in a fantasy game that doesn’t need to be there. It’s too realistic, and I’d still call it stupid if some woman told me that in real life. Because it means she wants X from you, but she hasn’t decided how badly, and or wants to test you. That’s not a good tactic with a Dominant male. Which again, in all the scenes that can lead up to it, and most after involving her, very much seems to be what she wants.

Point in case, you can meet in Yuki’s path as your Asian pet-play true sub, a tattoo artist who is a fem dom. She openly admits she wants to learn to Dom from you… and can have tables turned. BUT even if you get to that point with her, if you choose to promote the sex shop with her instead of one of the other girls, it doesn’t matter if the sex shop girl was one you were investing in/wanting to get into your harem.

She will just give in to the fem dom without any work invested, let her fuck her in the pussy (at least it looked like it) with a strap-on and call her mistress at the end. Your ass is chopped liver. Again: YOU ARE THE DOMINANT. All of the other events in the game are geared toward making the player believe, and invest in the idea they are in control.

Or are seeking it. At all times. It is incredibly jarring to watch those scenes. I was very much like WTF? That above anything else NEEDS to be fixed. ASAP. If the Tattoo artist and the sex shop girl aren’t supposed to be harem girls, fine. State it in game and I won’t waste time trying for them. If they are; don’t do anything to subvert the MC. At all. There’s also an issue with Lola the superintendent’s daughter – you can at certain point inject her with your call of pink or green potion. If you go pink, you own her.

Full stop you will eventually have total control of her. You may even be able to get the green option later and see how that goes – I don’t know, I had done that a few updates before, but this one I went green first. Green first locks her into the option of introducing her to the dean and it’s mostly another bi option that barely involves the MC at all. It’s not as jarring as the sexshop problem, but it’s mostly the girls.

As a last thing; let Harley have the ability to actually get pregnant. I mean, A) this game is ALL about fetishes and literally called deviant in title. But the sex shop worker who could have been virgin – and Chrystal who originally was one btw, not virgins. Harley mentions being okay with being MC’s breeding bitch. Let that be a thing. Final point of harping on sex shop girl, I took Harley with her the second time I tried not to fuck up my game path.

In the end of the promote scene, even though she’d already been at the point of calling me Sir; which denotes a strong investment in MC to any dominant mind, she makes a snide remark about who says I’d be invited next time. Since Harley is your sub, willingly, she should defend you. Or you should be able to point out that you own them both, and if there is a next time, it will only involve you or won’t happen at all. The only reason she would make that statement is if she wanted to be punished. Badly. If she is submissive, do not do it only when it suits her. No dominant will like that. Brats always get spanked. Sometimes a lot harder than they want to be. Yes, I mean that in more than the physical sense.

There is also the point she only had any help in this situation because you were willing and able to offer it. I am a little tired of Dev’s writing Dom/Sub stuff likes it’s a joke. Or it makes her ‘strong’ to emasculate the one she’s already chosen to submit to, and implied she’s invested in that stance of lifestyle. Stop doing it, please. It won’t help anyone want to invest in your game if they happen to think of themselves as either a dom or a sub at all.

Overall, this game is decent. That’s the best I can say about it considering the amount of effort you have to put in to getting any of the girls to do what you want. They’ve implemented a needless financial restriction that gets punitive depending on a very set algorithm now. It did not used to. Or if it did it was less obvious.

The story is not finished. There didn’t need to be any “dominant mind” competition. I don’t mind if you have a fem dom, but if you’re going to do that, make it damn clear that the persons involved are capable of equal time investment. It shouldn’t just be that I randomly click a name twice and because I didn’t know that I had to do that a second time I end up picking the girl whose going to just yoink and no… now I’m someone else’s sub – despite the fact the maniacal mage actually has viable chemical assistance in dominating the freaking female half of the world. That point alone made me want to howl at the moon. Full or not…
Wolfe out, players. I’ll catch you all later.

Combat is HARD; But It Doesn’t Have To Be… It’s Fantasy Guys!