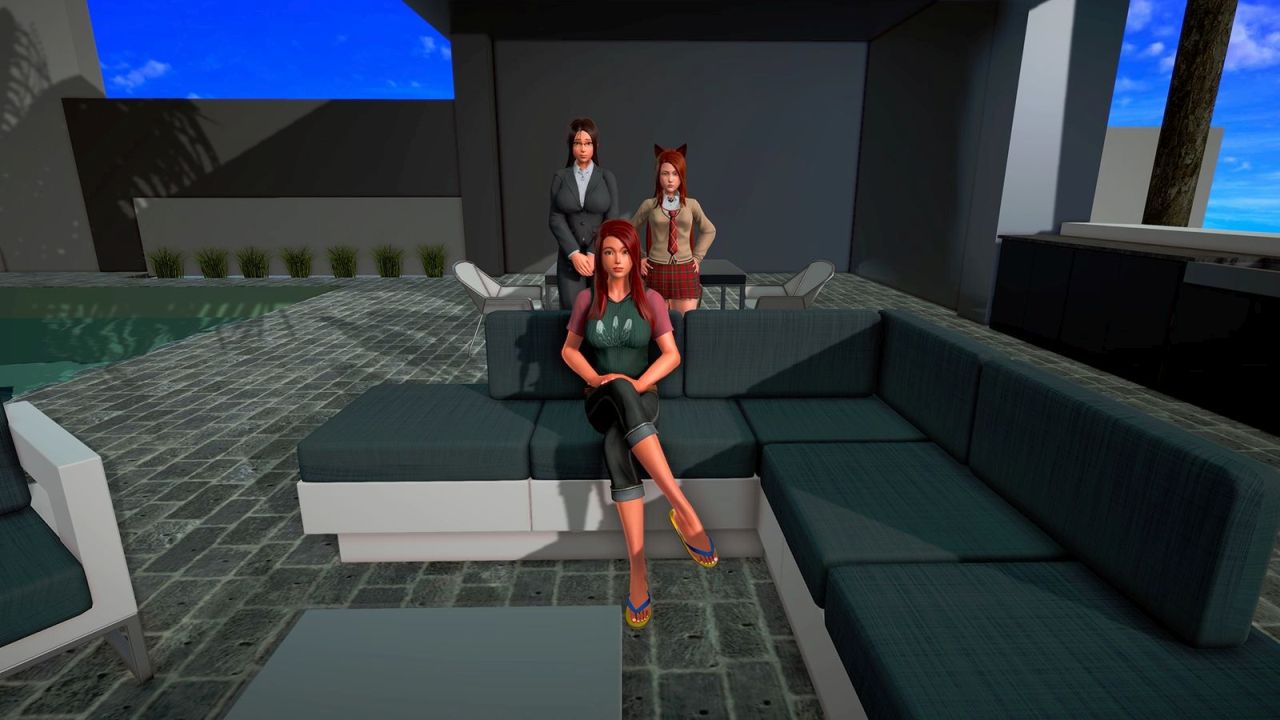 My New Family – And Just What Happened To My Old One?

Hello all you wonderful furred, fanged and otherwise beautiful people out there… oh what, that’s just me? Oh well. Anyway, I’m back and rarin’ to dig in to another juicy little gaming ham-bone for you. So without too many rejoinders, quips, quirks or puns, here goes…

Once again, it’s more what’s on offer than anything else in the game. Luckily, barring certain sent away decoder rings I don’t have as I missed out on the seventeen cereal box add somewhere down the line, it’s a good one. For the most part. The decoder ring could be lost in the mail. You never know. By that I mean there’s a heavy implication of incestuous unions here, that quite frankly Paetron is a little *whines* about. In that regard, you’ll have to equate certain words to truer meaning contextually. It’s not too hard, but it does take a second to wrap the mind around the jarring wording.

For fantasy purposes I’ll do the translation for you: Friends = Family. LandLady/Lord = Mom/Dad. Tenant(s) = Kid(s) It doesn’t take a rocket scientist to figure out. It’s just really awkward to read, or write I imagine. At any rate, besides that, there are a few weird things about the tale. First, you as the MC are abandoned for about X amount of years that is nonsensical that I don’t recall off-hand. Your “Landlady” (Who I will be referring to as Mom from now on damn it) let your LandLord (same goes and just assume for the rest because I’m not applying for Paetron here lol) take you away from her. There is some definite BS firmly involved.

So the MC comes from a broken home. His father was an abusive ass. He threatened MC’s Mom, who felt she couldn’t step in on MC’s behalf. She waited to find him for tied hands. It’s up to the player whether they believe that. Trigger warning aside, it’s not a completely implausible excuse. We’ll be getting to the one that is. At the start you end up taking the train to live with your Mom, who’s remarried, and recently widowed again. She had two other kids, with that other man. Both her taste in males, and the idea one of those kids has feline features is rather questionable I must admit. Which is frankly due to slightly ham-fisted writing, and reliance on tropes, but again we’ll get to that.

Other than the cat-girl Neko who is the requisite Tsundere by the way, of course, you have the pure maiden/sex-fiend sister. Ten guess’ who’s my favorite and the first nine won’t count. You may just be wrong, but you’ll never know. Life’s not fair, and that’s kind of the point involved. All of you “tenets” got completely screwed, in some regard. Even your “Neighbor/Friends” (in other words aunt and cousin) Who also had resoundingly bad luck with men. Must be something in the water. Or a genetic quirk I guess. Considering how kinked things get later, you’ll understand it’s only half said in jest.

Note the “Cousin” is just about carbon copied from her Mom. Except for curves. Holy gods I wish they’d stop that… o. o

Being honest, there are very few choices to be made. Mostly it revolves around which girls you want to pursue or not. Opting not generally only screws the player out of content; though there is one I hope to hell they’ll let you deny. I did say we’d get there. The neko who does have her charms I might add, when she softens a bit, wants your help with a school bully b**ch. You can choose to outright break her soul and make her your sexual slave. Just straight willing sub. Not magic or mind control involved. (Yay!)

Which means pure and simple there is no questionable issue of any consent. I really hate having to consider whether what I’m doing as the player should be taken so heavily, but I’m not the kind to just ‘shut muh brain off.’ Else you wouldn’t be here, taking in this fine quality piece. Yep, I hear the crickets in the back row too, thank you very much. Next time I’ll try for a legendary, wait… what do you mean this isn’t an RPG? Dang it!

Anyway there are very, very few break points involved. You can choose to be a bastard to your Mom, and that might lead to a faster end. You can choose not to forgive X NPC, and I really don’t know what happens, because I wanted to go on. The story for it’s few faults, did get me to invest in the characters I could interact with. It’s best to disregard the ‘LandLords’ overall.

You do get to evolve a whole metric f**k ton of relationships. With just about every girl I’ve encountered so far. That pure maiden; she’s the first one to talk about marriage to you, and kids. She’s also the rare as diamonds girl that wants to watch you give everyone your love. Call it cuck-queening if you will I’ll just prefer to view it as an avid appreciation for your skill, as a voyeur. Your fit and fighting cousin is actually the second to bring up kids. The neko’s not really opposed I don’t think, but the story hasn’t actually gone that far yet.

For me, the grandma is the biggest problem inbound. She doesn’t really belong in this story. She gets introduced as a monkey wrench thrown to add tension, and actually fucks the MC over heavily emotionally. Having every other female character side with him and say how wrong it was, doesn’t excuse it Dev. It just means you knew it was when you wrote it. I’d also say it’s disturbing because she had more ability – and literally was the one that most enacted MC’s pull back into the clan. It comes off selfish, but far too distant, because her inaction doesn’t logically track by suspended disbelief like the Mom’s can. It’s why they don’t excuse it. Not one of the rest of your “friends.” (Mind that I’m trying not to spoil here, so sorry if it’s vague guys)

Left = Death Glare Aimed and Ready; Right = There Might As Well Be A Halo Hiding Somewhere… Maybe Up her, uhm… maybe we better not go there. At least not yet, she’s just too pure for this world ; )

To Be Or Not To Be… Pregnant:

For the grandmother that’s not even remotely the question. Which is my other big problem with her inclusion. Yes, older people need love too, and if you’re keen on them, good for you. I personally don’t care for the joke all Asian people may as well be Tolkien’s elves. She’s nine-hundred years old compared to MC; she’s raised her own kids, and they have kids for God’s sake. Let it be. Besides that, there’s a friggin’ nun who you are probably eventually going to tempt to sin. If she ends up bearing out the holy bouncing bit o’ bread by unsanctioned communion, it still won’t make her name Mary. Or depending on your skepticism either one of them at the end, a virgin.

There’s a pair of gamer geeks, one of whom is intentionally androgynous and calls your cat-girl sister a neko outright. I get the point, but a troupe is still a troupe bub. Your group rounds with a fem dom you can eventually break into some sort of switching sub – again by consent so good on you. You’re the resoundingly unspeakably nice guy with the horse cock every girl wants to play naughty dragon with. Not that they need one, since you also always seem to be able to give them love. All of them may as well be named Robyn, if anyone remembers the song for reference.

Truth told there are a few too many side girls, but what do I know, I’m just some… no. Nope, I’m probably gonna get sued if I go there. No matter how much I respect his work. Points if you get that one. Either way, too many birds to chase will tire any breed of dog. Trust me, I should know.

She’s my Bitch. See above and you’ll get the joke. But no, really. This is the only girl you should ever need. Not the only one you’re lucky enough to breed… but that’s getting into spoiler territory xD

If you like characters that very clearly grow in relation to how you treat them, and a story you can sink your teeth into – because you’re gonna have to here – this game’s probably up your alley. It’s not a dark one, for most points. It’s got some emotional twists, and several heel turns to see, but it’s worth the time. You’ll want to give it your energy if like with me; to you a pack means family, and family means everything. Doesn’t always mean I play with a full deck. Remember gamers, a heart can break as many times as it can mend. So long as you’re willing to let the sunshine in. See it in one girl’s eyes; or a hundred. Whatever works at the end. Howl at you later my very special friends.

Taste Of Seduction: The Game

Apocalypse (Now, Or In Seven Days At Any Rate…)

Twists of My Life – Twistin’ The Night Away…