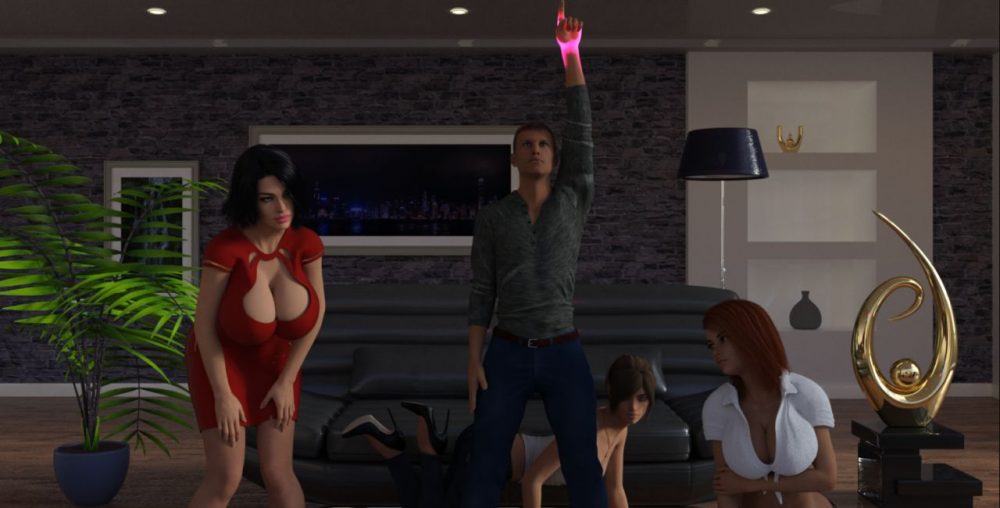 (I Fell Into A Burning) Ring Of Lust Review

Hello Gamers and yes, you can all skin my furry arse for that one later. I might even stand still long enough to let you. But let’s talk about my debatable tastes some other time, shall we… Betwixt fun and games per say; this one is less the first and at least to be called functionally, the latter. Now on with the review…

So far there really isn’t much of one. For a nice little change of pace I’m going to be more focused on mechanics with this game. I’ll have to be. The jist is this – and yes I have a bit of a problem in lore but we’ll get there. It starts of with a teen who has a dad who remarried. For reasons he’s come to meet this new step family. The step mom, two step daughters and aunt are all of course unrealistically hot. He wants to bone them. Just one problem. He’s a puny mortal with no offsetting skill to snare the dream to speak of.

Or is he? Problem one; he gets randomly assaulted by a “goddess,” who might not be. I say this for a very specific reason. Bear with me. Anyway, said goddess offers power beyond comprehension to her champion. Of lust. His totem of office, eponymous ring. And no, so far as I’m aware it doesn’t burn. He might want to get checked for that though… if the Devs add any more random girls.

This right here, HALF the bare minimum you can chase… which doesn’t mean an easy win

As mentioned; you are the goddess’ champion of lust. Gaining a ring which is supposed to be empowered the more energy you harvest and feed to her. You do not have to do this nightly, but actively wastes one of the four time slots per day to do this. You start with three skills to upgrade and there is a fairly effective walkthrough to follow on how best to gain every scene. The problem…

Execution. You are the champion of Rati, a goddess. Who I swear to all that’s not quite holy is the slowest power creep I’ve ever seen. All of the scenes thus far are not sexual. They are foreplay and there are FAR too many of them. If she is a goddess, she should feed back all power granted to create a never-ending loop. Give him the power to force the issue more quickly. Yes, I know what you’re doing here Devs. It’s lazy, bad writing as far as any kind of lore, and meant to give you time for padding so that you can program new things. Again, development is hard. I’m not in dispute of that. However, you will lose a good chunk of your audience if all you’re going to show for their massive amount of grindy work at the end is effectively, still very blue balls.

Seriously; what husband worth his salt leaves THIS all alone? o . O

There are as yet, a few key areas other than your house. God knows the first few times I played this game in previous updates I never would have found means to see anything outside of a very few scenes without going crazy.  Some of the events are counter-intuitive. Some may be bugged for all I know, and all of them are frankly half done as far as story. That one I’d harp less on. It’s still very much a work in progress. What I will note is it’s insane to have the greater powers be so large a cost in scope. There are too many girls to focus on, at random times that fit into that same boat. You do not gain enough points in harvest on any given day not to increase the grind on that effect.

Much of the time I took longer to get a result I wanted. From either of x number of girls, because I had to choose one to focus on for one day. It would be fixed if every action did NOT  cost a time slot. The invisibility power  would be better served by lowering cost of use with each consecutive try. Specifically because Rati says your body is “adapting to new power.” In that case why does every time I try to use the ring to influence a girl even with maxed sympathy, and who’s already started being heavily into foreplay with me by that point, cost such a big chunk of lust power? That’d be best spent on seeing the scenes with invisibility.

Fortunately you don’t have to be invisible to see these… a truly beautiful set on her ; )

I’m not saying they should all just instantly want to jump on his pogo, and declare themselves owned. Or mark him the only baby daddy they all want sight unseen. What I am not above pointing out is that since all of this so far is only foreplay, it marks Rati less the Goddess than a mind-fucking, manipulative demon. Ever heard of a Succubus anyone? Actually, you could wring a very dark and brilliant turn into a heel twist there. If you wanted. I’ll call it a freebie. I like to share. At any rate, the game is not bad, it’s just longer drawn out to get to the goody bag of tricks than it needs to be.

In summation, the art is very attractive. The story needs fleshing out to have purpose beyond Ima goddess, do my bidding, but no… don’t get your hopes up kid. You’ll be six hundred and sixty-nine years old before you get any hint pussy. Frankly all the girls are a little too cagey. We get that they’re married into his family so they realistically wouldn’t count him anyway, but god damn. If the key to the game is empowerment in service, serve to empower the MC. As much as you can. Otherwise you’re like to end with far more players pissed off, than actual fans. Also, please don’t make any of them freak out about pregnancy.

Like the mouse said folks; here I come to save the day… or slam into the wall of a trap, either way. Maybe if I find a nice little cat, or a big piece of cheese… aw fuck it, guess I got a little steam to let off, so I’m gonna go bark up the wrong tree today. Wolfe out, my wild men and women. Good day.

Twists of My Life – Twistin’ The Night Away…

Deliverance – From; or into Evil? That’s Up To You…