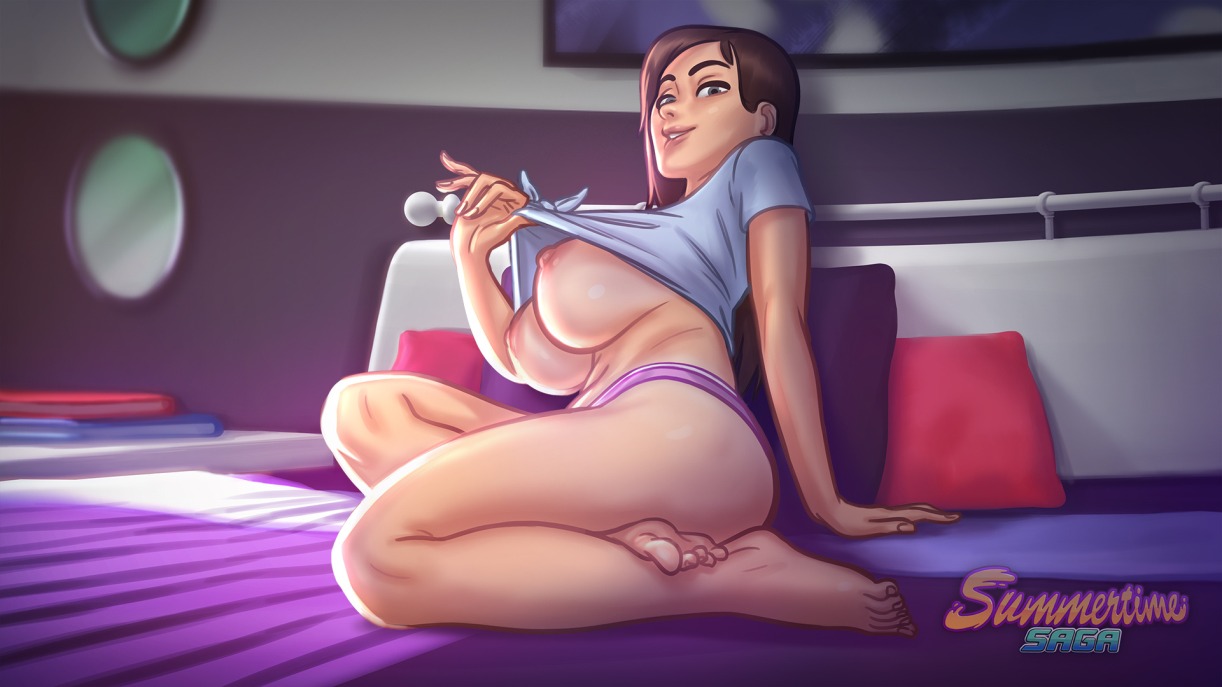 Hello again adult gamers, this time it’s gonna be a hot time in the summer city tonight, well… for at least one guy.

That’s the token hero by the way. In this game, you start off with a questionable backstory in the fact your father may have had some shady dealings that got him killed. You don’t know, and one of the things you can try to do in the time allotted to you in game is try to find out.

Now, I don’t know for certain that part is fully fleshed out in game, but it’s there as an option
and will likely be answered in future updates. If you didn’t played the game, download it now and if you are on android, check out the latest android version for Summertime Saga.

You start the game as usual, a somewhat hapless, and at least a little nerdy teen male. Also, you have stats that can be pumped like strength, intelligence, charm etc.

You will have to gain them over time, though when I played the charm involved a mini game that was easy to fail… so it’s a bit more difficult than it needed to be. However it can’t really be skipped as certain female paths you can try for, do require “x” amount in a stat.

You can do jobs, and you will attend school. Even though the title says summer and it’s not specifically mentioned that you’re in summer school. It is one of those start from scratch and work to being ‘god of the
harem’ style games.

Contents hide
1) Some females actually require you take certain jobs in order to meet them at all.
2) The problem lies in the game economy, and again, very possibly limited days.
3) There’s a goth girl who likes the charming type and invites you to said mini-game of a rap battle. Again, it’s easy enough but will require a lot of reloads to get anywhere.
3.1) You are the blank slate, questions asked are basically yes or no.
4) Some of the fetishes I know of are furry, domination, milking and again, pregnancy.

Some females actually require you take certain jobs in order to meet them at all.

Side note; Diane in the version I played was I believe, the only one or one of perhaps two that had the option to be impregnated. If that’s your thing.
From what I’ve looked up, the sex mechanic might have a mini-game attached to it. I admit I didn’t actually get that far.

The game itself is a bit frustrating in needing certain stats to get anywhere socially. Watching the character fail too often can make some players angry. It is definitely a very slow-burn game.
Topping that, it’s not immediately obvious how to raise most of the stats.

For example with your strength, which you might need to stand up against bullies or impress a certain snobbish girl, you have to go to the cafeteria and talk to a friendly jock. That guy will tell you where to go to raise strength.

The means to actually do so also requires you to find an old pervert who runs the gym a pair of panties. Since he doesn’t tell you who might be willing to give them up or where you might get a pair without anyone being the wiser, it’s a big road-block to progress.

I admit I was never clear on how many days are in the game’s time limit, or whether it had one to speak of.

That is another aspect that to me needed to be much more clearly stated. I will give points to thinking an audience doesn’t want everything handed to them outright. But if I have to solve a rubix cube just to pump some iron so I can impress a girl, that’s too much.

There is a way to solve certain quests. However the game does not make them obvious and that can hurt some players as far as progress. The graphics are cartoonish, and won’t be for everyone. The means to gain money are varied, but the actual amount as far as I saw was not impressive if there is a limit on days in game.

You can for example somehow buy a house and a car to impress a certain type of female. If you can afford to.

The problem lies in the game economy, and again, very possibly limited days.

Most players that don’t chart things out to the “Nth” degree are not going to be able to get those items. Another thing in that is, there are game achievements.

While I appreciate the call out to console gaming, some of them are very unrealistic. A mirror to that problem in consoles’ achievements I suppose. More casual gamers may have a problem with these aspects.

To me, there was potential in the story for several paths. You can date a cheerleader type, with a former boyfriend who is a bane to you at first. You can try to woo your best friend character who’s a bit of a brain, but introverted. Innocent.

There’s a goth girl who likes the charming type and invites you to said mini-game of a rap battle. Again, it’s easy enough but will require a lot of reloads to get anywhere.

Each stat only has ten points. Trying for each point wastes time, and there are only four sections at best to each day.
Actually a lot of the content is minigames. They aren’t bad per say, but from what I played there’s not a lot you as the player can do to alter your actual personality.

You are the blank slate, questions asked are basically yes or no.

There may be a little more variety than that. Overall, I believe there’s a lot more that needed to be done with the game before I would be able to properly enjoy it. However, I’m just one person and many other gamers like Dark Souls where I don’t. Maybe I’m just not great at min-maxing.

The game is very much in the vein of the Sims, as a slice of life simulation. It can be fun. If you are willing to invest a fair amount of time and effort into getting something from the game. If that sounds like your perfect night in, all the power to you.

Some of the fetishes I know of are furry, domination, milking and again, pregnancy.

How much effect any of that has on the end I can’t really say. I didn’t manage to play long enough to get there myself.
Those who enjoy minecraft in style and mini-games as innovation in gameplay mechanics will possibly have better luck completing the game.

For me, it has an interesting premise with a wide variety of possible options. It is also far from complete as yet. Where it’ll go in the future is anyone’s guess. For fans of it’s genre I think it’ll be a wild ride to the end.
Check out the video below to see a short game play demonstration.