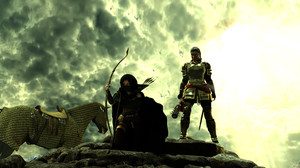 Hello and a hopefully Happy Valentines all you wild-hearted gamers out there. Or at least with hope better than mine. Since I’m sit here typing this review and pondering my solitary life choices tonight. Anyway, once more into the breach shall we? Speaking of the girl in the pic as a general statement could very well be that, pretty easily. Not that I’m complaining. Onward and to some extent if semi-historical fantasy tropes are your thing too, probably upward, but that’s another story.

Now, normally I won’t waste your time reviewing a game that’s got too little to chew on, but this game does let me say have potential. The story is low fantasy, and it’s going to likely be very political. Those who don’t like at least a fair amount of reading are probably best to find a more action heavy game. You start as a knight in service to a new made countess. I’m not going to name names, but her character description best rhymes with GOT and THOT respectively. Spoiled works too, but I digress.

Does this look like a trustworthy female to you? Does she seem perhaps a bit too, guarded…

At any rate, her husband’s dead and she’s the ambitious type. For dramatic irony – where the player/reader understands points that were they the actual character they wouldn’t otherwise be aware of – you start out aware of her machinations at the beginning. What you choose to do about them, and whether you stay the loyal knight you can choose to become is entirely up to you. And possibly wonked detection of choices, depending on balance of certain branched factors. For example there is a path that splits four ways in your choices. That gets into mechanics, so I’ll save it for later.

Your goal is to coerce, cajole or otherwise probably beat the unholy “ahem” out of certain powers that could rise against the countess. Who just for good measure also happens to be your blood cousin. Not that it wasn’t common back then, but honestly it wasn’t AS common as some make it out to be. At any rate, she’s potentially a romance option, I don’t know yet. There will probably be several factors in going that route. Including your own potentially consuming ambitions. Or loyalty to your family, who also have that trait in at least one factual case.

So far, as mentioned above there is a functional branching of choice in how you handle certain situations. It is a bit, problematic for my view and I’ll explain why. You can fight, but the mini game to do so is highly unnecessary and potentially punitive for those with slower systems. You can probably die if you make the wrong choices. You’re introduced to at least one enemy faction really early on as fore-shadowing that I will admit is in itself, well done.

If you favor the mouse over keyboard, I assure you new player, those bars will probably be reversed. Blue is for Stamina btw, so have no fear, for now… he is fine. It is but a flesh wound. No, I could not resist. Arrest, maybe o. O A rest might be nice actually.

The problem with the branching path is about the same as the quest system right now. That’s another issue I’ll cover soon. There is one branch that does not belong on the tree, so to speak though I do give the author points for attempting realism. That very attempted thing is as much where the concept of a lewdness bar would fail. Messages were not so easily sent back then. Nobles were not slandered lightly. Besides, a random maid or tavern wench wouldn’t have turned your advances away. For one of several good reasons.

The implementation of that kind of bar as a negative thing in a sexually based game is also unnecessarily punitive. The piety should counteract it’s effect. Not take it away. Also, do you have any idea how ambitious knights were? Yes, they were bound to serve but they were also related to nobles more often than not. In real times, a farm boy knighted as a soldier could not rise above the rank of baronet. Nor could their family if granted the title. They were useful because they served. Now marry a noble woman, or man and that was a slightly different fish. It’s why I’d excuse Jessica and the fact you start as relative to a countess.

There are certain choices in dialogue you can make which will change the course of your adventure. I haven’t played very far as I got frustrated with the lack of sexual content and the grind to get it. I will say for a starter village to be so stingy with help is poor form and that could be fixed. The first task you’re set out on starts you off borked unless I missed more than I think. This is where the quest log needs to be updated. Seriously. It’s not enough to tell me the quests exist. Or to hint that I can get certain events in a relationship screen. You’ve got to tell the players how that can be done. Step by damned step. Especially if you want people to pay for the content they’re otherwise not likely to figure out how to find.

The game mentions that lumber or other supplies can be leveraged. In the town itself, you can find out the sawmill has no paper. Should have been the easiest thing in the world to suggest to the mayor who is fucking a tavern wench who’s not his wife – and she doesn’t like if you hint you know about it in any way – that either you’d spill his secret “affair of the heart” OR that you could supply him with means to give paper to the township. No affinity needed. Like I said though, this game is in probably really early development. I’m noting it, but I’m willing to pass over frustration with the fact for now.

How to get the females to like you also needs more hinting, like in the dialogue. Not a relationship screen I can’t access during the fact. it’s a waste to reload so often just to figure out the rubix cube when there are that many young and sometimes just willing kitties to chase. For example; two of the three choices you can make with the tavern mistress when you figure out she’s schlepping the mayor will net you negatives to her affinity. One major, one minor. Either way, if you choose to pass over the younger and more willing female merc for her time as companion you get blue-balled.

Meanwhile going for the merc ends up getting you a quest that might aid your sister some day and gets you a drunken tryst with said merc at the end. You can choose not to, or to take her ass or her “ahem” kitty. You can also choose to finish inside her. Not sure if that’s going to lead anywhere but if it does it’ll probably cost you somehow. I just know it. At any rate to cut this long-winded thing short at the legs, like I wish you could do in dialogue for any fights but oh well, the quest log needs a lot of fleshing out. The relationships need hints or symbols. I don’t care if it’s in neon or “too simple;” if there are branching paths and replayability is “strongly encouraged” then remember this is an adult based game on an adult based site.

Girls like this might as well have the Japanese favorite game symbol “???” Finding them, nevermind wooing them is just like that right now. Also, was the Dev listening to the song “99 Red Balloons,” methinks perhaps…

It doesn’t need to be Dark Souls to figure out how to get into a girl’s pantaloons. Bloomers, knickers or whatever the hell else they might have been called back then. Jeez, just think about how long it must have taken to get the frigging corset off. If you aren’t going to add the help hints in dialogue then at least allow the player to save during. Like before they make a choice. Either works, though reloads are annoying at times. It’s better than having to start back an hour ago or save before entering any place and hoping I don’t run into a person too far into time.

As a fast aside, the economy is also borked. Entirely, if realism is your thing here guys. Really. Truly. He starts with twenty gold coins, and that’s fine. Even perhaps realistic given the value they had. The problem BEING the value they had. The merchant that I know you can buy pottery from has several wares that are WAY TOO EXPENSIVE. At best the most egregiously priced should have been worth maybe five silver. Or fifty coppers. Gold was more  used by the nobles. Silver was more given to service and tradesmen. There is no way a potter was going to afford to stock wares at that price, or that anyone outside of a royal patron – ha, yes that was intended btw – would have been able to afford such prices. She would have been starving and homeless for that alone.

You need to fix it so that the Kingdom Come Deliverance/GOT potential of this game – it really does have a good bit with some spit and polish – isn’t ruined by the frustrations of slightly anal and backward systems. There’s a good deal to like about this one, though I admit many of the girls are a little too “thicc” for my tastes. Again, in those times a voluptuous figure was really not common. There was a reason it was vaunted in Italy. Anyway, it’s a good start, and with time love and tenderness – I’m going to hell for that one, I know – it could be a really intriguing game. Like Simba said though; I just can’t wait to be king. Adios, Amigos. I’m gonna go see if I can’t just steal me Cupid’s damned lead arrows… That way next year I’ll have better luck.

Combat is HARD; But It Doesn’t Have To Be… It’s Fantasy Guys!